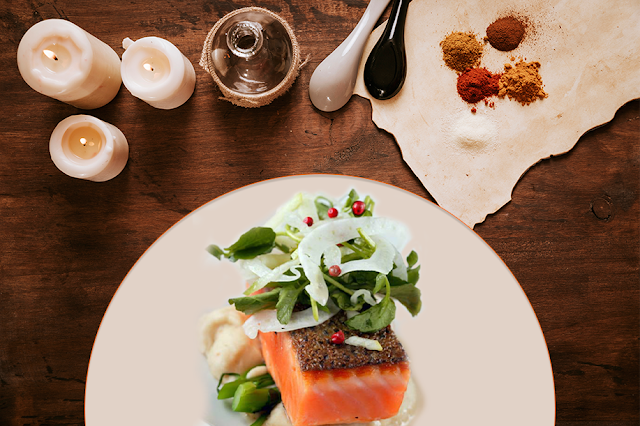 Food has always been the spice of life, especially when it’s Indian cuisine. Indian cuisines consist of a wide variety of traditional as well regional cuisines. Given the variety in soil type, climate, culture, ethnic groups and occupation, these cuisines differ significantly from each other and use locally available spices, herbs, vegetables, and fruits. The religious beliefs and culture in India have played a significant role in the evolution of its cuisine. India’s unique blend of cuisines evolved through large-scale cultural interaction with our neighbors namely, Persia, ancient Greece, Mongolia and West Asia. With the coming of Arabs and Portuguese traders, chili peppers, tomatoes, potatoes, etc. came into existence. European cooking styles were introduced during the colonial period. This has since then always, added to the variety of Indian cuisine.

The history of Indian cuisines can be taken back to the ancient days when the culture of preparing cuisines in a proper procedure was introduced by the two ancient Indian civilizations, Harappa and Mohenjo-Daro. The Vedic period defined even better forms of cooking with innovative recipes. During the ancient period of time, a regular and balanced diet included vegetables, grains, meat, fruits, dairy products, honey, beverages and different kind of spices. In the ancient times, the food cuisines were largely influenced by the religious beliefs of the Indians. As a result of which Hindus, around 300 BC, quit eating meat as they believed that animal sacrifice adds to their karma and sins. They believe eating meat kept them free from the wheel of rebirth. Although people didn’t give up on meat completely but reduced the consumption, after a point of time. Cuisines in ancient times were traditional or are referred to as ‘Desi Khana’. The food during ancient times contributed to the development of body, mind, and spirit, which eventually reflected the increasing changes in Indian food types.

Then came the medieval period, where the food habits drastically changed due to the introduction of the most popular Mughlai cuisine by the Muslims from Central Asia. With their entry, came the different flatbread and fruits among Indians. Mouthwatering and sumptuous cuisines came into existence during the periods of Shah Jahan and Jahangir. After few days came the Nizams and Portuguese who developed their own style of cooking, with some eminent dishes like Biryani and Indian Vindaloo, respectively. Aren’t you already craving for it? These Mughlai cuisines included a number of seasonings like saffron, nuts and the concept of cooking in ‘Dum’ or sealed pot, became prevalent. Many of you, now love to eat the mouthwatering ‘Dum Biryani’. The notion of Mughlai food like biryani and other tandoori dishes emerged from the influence of the Sultanate dynasty. In the medieval period of India, travelers from around the world visited our country and spread knowledge and products like tea, coffee, and other spices.

The 80’s and 90 saw an impact of western cuisine, which continued till the modern times, with Chinese, British and Anglo-Indian food had a major influence on the Indian food. Sweet became a thing for special occasions more than just an attraction during the Indian festivals. Modern Indian cuisine has created a rapid stride in evolving Indian food drastically from Ancient flavor to give it a modern touch. I’m sure your mouth waters after seeing the sinful desserts laden in Kadhai’s, rich lentils simmered with spices, flatbreads stacked glazed with butter, etc. Indian food is not more just about Parathas, Rajma Chawal, etc. but now all of you love to eat Italian, Thai, etc. Nowadays, not just a particular state, but, people from different states also love to eat regional cuisines. Indian cuisines have seen a lot of additions and subtractions, beginning from the ancient times to the modern times.